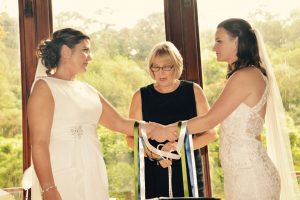 So what exactly is Handfasting and what are its origins?

In reality the origins are probably lost in time; however, this ancient Celtic custom has been around for many thousands of years. Its origin was that of ‘Striking a bargain by the joining of hands’. The etymology of the word suggests it stems from the Anglo-Saxon word ‘handfaestung’, which was the tradition of shaking hands to signify a contract

Evidence suggests handfasting ceremonies and weddings coincided with some types of pagan worship with the Celts that migrated to Europe in and around 7000 BC.

In those days marriage and weddings were more important as a social contract, economic or political agreement rather than our modern day emphasis on love and commitment between two people.

The ceremony of a public handfasting, was one that took place in front of witnesses, often friends and family, but also the local community.

This ritual is the origin of the phrase “tying the knot” and “the bonds of matrimony”.

In today’s ceremonies handfasting is used to symbolise a couple’s connection and devotion to one another and is a lovely tradition profoundly seeped in Irish history.

This ritual can involve a number of your wedding guests that have been chosen to place the handfasting ribbons.

The colours of the ribbons are significant and the couple can assign the meanings to each colour.  They can also write their own promises to be used.

Once the ribbons have been placed on the couple’s wrists, the knot needs to be tied.  Where a couple already have children, I will usually suggest that the children tie the knot for the bride and groom, AKA, mum and dad!  This is something that is hugely popular with families.

The couple can then take the handfasting ribbons away with them as a memento of their wedding.

Posted in Uncategorised
Celebrant or Humanist? →

This website uses cookies to improve your experience while you navigate through the website. Out of these, the cookies that are categorized as necessary are stored on your browser as they are essential for the working of basic functionalities of the website. We also use third-party cookies that help us analyze and understand how you use this website. These cookies will be stored in your browser only with your consent. You also have the option to opt-out of these cookies. But opting out of some of these cookies may affect your browsing experience.
Necessary Always Enabled
Necessary cookies are absolutely essential for the website to function properly. This category only includes cookies that ensures basic functionalities and security features of the website. These cookies do not store any personal information.
Non-necessary
Any cookies that may not be particularly necessary for the website to function and is used specifically to collect user personal data via analytics, ads, other embedded contents are termed as non-necessary cookies. It is mandatory to procure user consent prior to running these cookies on your website.
SAVE & ACCEPT